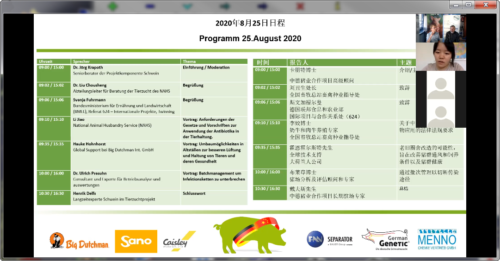 The German Farm Consulting GmbH & Co KG (GFC), Fahrdorf, Germany, together with the ADT Project Consulting GmbH, Bonn, held a webinar on the 25th and 26th of August 2020: “The antibiotic-free feeding of pigs” – as part of the German-Chinese Cooperation Project for the further Development of Animal Breeding and Animal Husbandry in China. About 100 participants, seven speakers, the representatives of the ministries of agriculture of both countries and specialist interpreters were connected via ZOOM on two mornings. Dr. Joerg Krapoth, general manager of GFC and long-term employee ADT in China M.Sc. Henrik Delfs led the webinar from Wahlstedt, Germany.

The Chinese government has called for a legal ban on antibiotic growth promoters from January 1, 2020. The presentation by Dr. Li Jiao (NAHS, National Animal Husbandry Service) described in detail the requirements of the laws and regulations governing the use of antibiotics in animal husbandry. Remaining stocks must be used up by 31.12.2020. As substitutes are mentioned traditional Chinese medicine, enzymes, probiotics, antibacterial peptides, vegetable oils and others. In addition, research was and is currently being done. The goal is to achieve stable and healthy animal husbandry in China.

Hauke Hohnhorst, Big Dutchman Int. GmbH, reported to “Conversion measures in old stables for better ventilation and attitude of animals and their health”. He pointed out the climate factors with limit values in the barn and the influence of efficient ventilation on animal health. Optimal conditions are prerequisites for healthy animals that do not need antibiotics.

Dr. Ulrich Presuhn (GFC) then discussed “Batch management in pig farms to interrupt infection chains”. The structural work is the basis for a clear operational procedure and the planning of the employees. Production groups allow for improved hygiene, and the spread of germs is prevented. The resulting better health of the animals requires less medication and the animals perform better.

The official veterinarian and pig expert Dr. Dieter Mischok stated in his report “From antibiotic feeding to individual animal treatment” that the use of antibiotics in livestock farming is mainly aimed at controlling bacterial diseases. While in the past antibiotics were administered via feed and drinking water, the tendency today is towards individual animal or pen treatment. Indication of use and strategy require the determination of the germ species and antibiogram – resistance test and selection of the antibiotic. Resistant bacteria can pass from animals to humans. Problem solutions lie in the use of proven genetics, good food and clean water. Regular carcass checks are important and animal health screenings. Hygiene and biosecurity must be ensured, health maintenance through vaccinations, pH-value reduction in the intestine and probiotics, therapy according to antibiogram. This includes staff training on disease-signals as early detection. In general, a reduction of antibiotics is feasible, but antibiotics cannot be dispensed with at present due to the therapeutic necessity of bacterial infections, the prevention of bacterial spread of disease and animal epidemics and to avoid the transmission of zoonotic agents to humans. 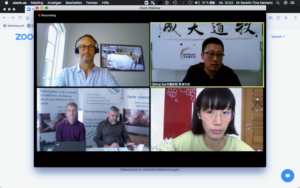 e insignificant, streptococcus meningitis is reduced by 60 to 70 percent and the use of antibiotics in piglets has been reduced by 80 percent. There was significantly less cannibalism and the germ pressure had decreased significantly, also panaritium and arthritis decreased. Claw health was considerably improved.

The specialist for pig nutrition Manfred Schoenleben, SANO modern animal nutrition GmbH, described the “Antibiotic-free feeding – experience from Germany and conversion in China”. An optimally fed sow provides the basis for a successful start in life for the piglets and the cheapest feed – sow’s milk. The diet supports the development of the digestive tract by providing sufficient colostrum, sow’s milk and supplementary feeding to build up the immune system, adapted enzymatic training in the suckling phase and stress-free weaning. It supports the development of a stable immune system. With functional components, such as fatty acids, acids and salts, one can influence the health of the digestive tract and use their antibiotic effect. Pre- and probiotic substances support the barrier function in the digestive tract.

Henrik Delfs reported on the “Experiences with 12 months of application of the rules for antibiotic-free feeding”. Prerequisites were a functioning hygiene concept, healthy animals from the beginning and their healthy maintenance. At the demo farm Yifa, all the conditions were created for new animals to be fed, so that no antibiotics could be used preventively.

The farm was completely emptied, thoroughly cleaned and disinfected. A strict separation of the farm took place. External contacts were minimized by organizing the transports and future transports (animal, feed, material and people) were controlled at an early stage. Checkpoints were set up and a multi-level biosecurity system was established. Also, continuous pest control was carried out before the start of re-population and afterwards. The animal came from highly healthy farms of origin. The pigs were examined before and after arrival (blood samples). A quarantine of the pigs was carried out in the appropriate age groups. The sows were given basic immunization by vaccination and observed daily. The farm was half occupied and the individual production areas were separated. A 3-week-rhythm was established. The employees had time to learn the procedures and to concentrate on the animals. The stable personnel in the individual production areas received intensive training. Feeding advice was provided by an international feeding company. First results show an average farrowing rate of 92 percent, 13, 2 live born piglets per litter, a survival rate of born piglets of 94 percent and in rearing of 98 percent.

Tasks for the future, according to Henrik Delfs, include maintaining biosecurity, increasing the number of sows from 3,000 to 5,000, increasing manpower, increasing contact with the outside world and developing an effective and complete monitoring and control system to maintain the high health status of the sow herd.

In conclusion, Dr. Joerg Krapoth added that after systematic remediation, the Yifa farm has seen a 30 percent increase in performance, which will pay for itself within two years.