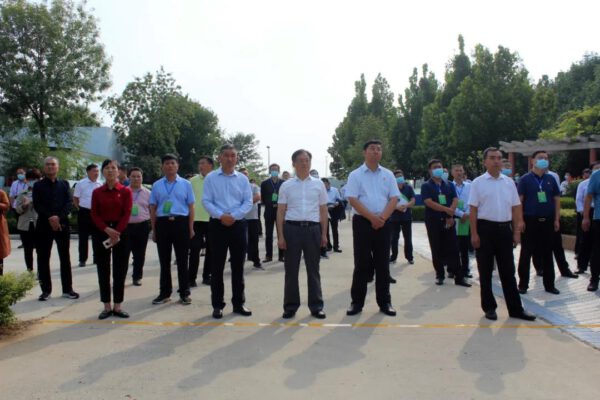 High-ranking visitors at the demonstration farm of the German-Chinese cooperation program “Yifa Animal Husbandry Co, LTD”, in the Chinese Henan province. On September 28th, a delegation led by the Vice-Governor of Henan Province, Mr. Wu Guoding, and others from local authorities, universities and research institutions visited Yifa.

Yifa was awarded for its documentation and complete traceability of all work carried out within the farm, ASP prevention and the associated conversion and modernization measures.

Yifa can look back on an output of 120,000 pigs and the production of 2.6 million sperm doses. The boar station is currently the only one in China that meets the highest hygiene and disease prevention standards. This includes the air intake filter technology, the CT scan measurement technology and a sophisticated biosecurity system, which were developed within the German-Chinese cooperation program in the last 3 years.

The delegation noted that Yifa fully lives up to the leading role of a modern company and contributes to the transformation and upgrading of modern animal husbandry and high-quality development.

At the same time, Yifa will in the future strengthen the transformation and modernization and the cooperation between enterprises and scientific research institutions in order to create a strong Chinese “core breeding” for pigs in order to achieve effective, fast, high-quality development of enterprises for stable production and supply of the pig industry.

Special work demands are made in areas such as “stabilizing production and securing supply”.