On June 30, 2021, the second project phase of “Sino-German Cooperation in Animal Husbandry” ended. On this occasion, the final meeting of the “Sino-German Cooperation Project for the Further Development of Animal Breeding and Husbandry in China” was held in close cooperation with NAHS on June 16, 2021. The event was hybrid with participants on-site and online. Thus, a total of over 90 people participated in this event.

Dr. Liu Chousheng, Department Head of Animal Husbandry Extension of NAHS, led the event as a moderator in the first part. At the beginning, video sequences were shown, which gaveimpressions of the Chinese and German animal husbandry. 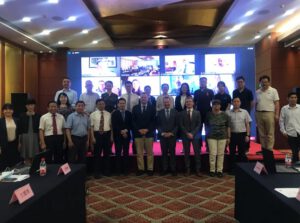 On the Chinese side, Mr. Zhao Lijun, Department Head International Department / Asia and Europe at MARA opened the event with a greeting. The Sino-German Animal Husbandry Project has been carried out by NAHS and ADT for 10 years.  According to the signed agreement, both partners have successfully completed the tasks of the 1st and 2nd phases of the project and exceeded the expected targets to a large extent.  The cooperative project has made a positive contribution to the development of Chinese animal husbandry.

Mr. Axel Wildner, Agricultural Attaché of the German Embassy, presented in his greeting the ever increasing demand for animal products in China. In the future, this demand can only be met by modern, efficient and sustainable animal production in China, which is increasingly confronted with the challenges of environmental compatibility, animal health and animal welfare. These issues were included in the animal breeding projects and played a crucial role.

Ms. Yang Xiaomin, project manager of the project office in Beijing, then presented the manuals, handbooks and educational videos developed in the project. These are being produced and published in close cooperation with NAHS.

The results of the project work from the point of view of the Chinese project participants were summarized by Mr. Shi Jianzhong, Secretary of the Party Committee of NAHS. The German-Chinese cooperation project has a broad range of expertise and the project organization and implementation have worked very well. The Chinese side has set up a management and expert group especially for the project to ensure a direct exchange between the experts and the participating demonstration enterprises and thus a smooth implementation of the project. The highlights of the project cooperation are numerous. The project includes practical on-site consulting, theoretical and technical training, regular project symposiums to disseminate the work and results accordingly. The cooperation has achieved remarkable results.

The project has promoted technological progress in cattle and pig farming and in relation to the climate and the environment, and the introduction of high-quality genetic material. The technologies, production and prevention and control capabilities, as well as the level of biosecurity have been improved in the farms. The project has made important contributions to the development of local animal husbandry in China and written a new chapter in bilateral animal husbandry cooperation. The Sino-German cooperation project has achieved remarkable results and the project team has played a crucial role in disseminating the findings and experiences.

The next part of the event was the summary of the results in the cattle project component. At the beginning, Dr. Ferdinand Schmitt, team leader and long-term expert cattle, presented in his lecture the project activities, the personnel deployment as well as the achievements of the involved economic partners. He then presented the concrete results of the project on the demo farms of the cattle component. The progress made on the farms in the areas of animal husbandry, animal breeding, animal health and manure utilization, which was achieved through the joint project work, was surveyed and evaluated in a joint survey by the German and Chinese sides. Particularly noteworthy here are, among other things, the results in the 10-year cooperation in brown cattle, spotted cattle and dairy cattle breeding. At the end of his presentation Dr. Schmitt pointed out possible approaches for further cooperation between German and Chinese partners. Good networks have already been formed, especially in the areas of brown cattle and dairy cattle breeding as well as in animal identification.

In her presentation, Prof. Wang Yachun from the Chinese Agriculture University focused on the results of the “Competence Network for Climate and Environmentally Friendly Animal Husbandry in China”. Here, environmentally friendly measures and innovations were successfully demonstrated in 4 practical farms in China. Furthermore, she highlighted the experiences in the field of animal evaluations in brown and spotted cattle as a result of the project work and finally thanked for the constructive and close cooperation.

Ms. Geng Juan, Xinjiang NAHS, in her statement, representing the demo farms in Xinjiang Province, appreciated the progress in brown cattle breeding due to the cooperation and consultation with the German project participants.

Finally, the cooperation in the project component cattle was summarized by Dr. Hans Aumann, BVN, representing the economic partners. He recalled the positive atmosphere of departure at the beginning of the project and the good cooperation with the demo farms in the field of cattle genetics. He praised the adaptability of the project even in difficult times, when, for example, import restrictions were imposed on cattle semen from Germany to China and no genetics could be supplied. Dr. Aumann also spoke in favor of further German-Chinese cooperation in the course of a continuation of the project from the point of view of the economic partners.

After a short tea break, Dr. Schmitt took over the moderation of the event. For the presentation of the results from the project work in the project component pig he handed over to his colleague, Mr. Henrik Delfs, long-term expert pig. In his presentation, Mr. Delfs first introduced the project activities, the economic partners and the special personnel structure with German Farm Consulting as co-implementer, with Dr. Jörg Krapoth as the main consultant playing a decisive role in the conceptualization and implementation of the project component pig. Mr. Delfs presented the results in the individual subprojects of the two demo farms Yifa and Liuma. Particularly noteworthy here are certainly the improvements in semen production in subproject 1 at Yifa, as well as the improvements in biosecurity and increase in production due to training and education on both demo farms.

Afterwards, Prof. Wang Aiguo from the Chinese Agriculture University summarized the results of the work in the pig component from a Chinese point of view and mainly discussed the increases in semen quality and piglet numbers as a result of the consultations and trainings by the project team. An important contribution to the dissemination of the findings from the cooperation is made here by the numerous handbooks and manuals that have been developed together with NAHS.

In his statement, Yuan Quanshui, Chairman of the Board, Yifa demo plant, once again emphasized the good and very close cooperation with the German experts. Especially the new construction of 1500 pure breeding farm is one of the biggest projects for Yifa, which resulted from the cooperation. He thanked all project participants on the Chinese and German side for the good and fruitful cooperation over the past years.

Dennis Engelking, Big Dutchman, summarized the cooperation from the point of view of the economic partners in the pig component and praised the good cooperation with the demo farms. Even difficult challenges such as the outbreak of African swine fever (ASF) in China and also the COVID-19 pandemic were mastered by the project. Trainings and education were adapted accordingly and conducted online if necessary. Finally, Mr. Engelking highlighted the new construction of a 1500 breeding farm at Yifa as a highlight of the project work.

After the results of the past project work were presented in the first part of the event, the second part of the event was dedicated to the future development of animal breeding and animal husbandry in Germany and China in the next 10 years until 2030. For this purpose, Dr. Liu Chousheng, Department Head for Animal Breeding Consultancy of the NAHS, presented the connection of Chinese animal husbandry with the challenges of environmental protection and resource efficiency, Animal husbandry with the challenges to environmental protection and resource efficiency. In his presentation, he emphasized the good cooperation between Germany and China and the necessary transfer of technology and know-how from Germany. The German-Chinese cooperation has achieved very good results in animal breeding and animal husbandry. The demonstration farms have fulfilled their role. This should serve as a basis to continue and deepen the cooperation in the areas of breeding, feeding, technical modernization of farms and traceability and thus improve the quality and safety of animal products.

On the future of animal husbandry in Germany, Dr. Anke Römer, an employee of the Mecklenburg-Vorpommern State Research Institute for Agriculture and Fisheries (LFA), gave an outlook. In her presentation, she referred to the increasing alienation as well as the decreasing acceptance of the German population towards animal husbandry. In her view, transparency will play an essential role in counteracting this development. Furthermore, there are approaches for the further development of breeding. In the future, secondary traits such as health will be given greater weighting and prioritized over performance-enhancing traits. Animal husbandry in Germany will continue to make the transition to more animal-friendly and performance-adapted production methods. In addition, climate neutrality in animal husbandry will play a significant role, and new husbandry concepts will have to be developed to meet consumer demands in the future.

In her closing remarks, Ms. Svenja Fuhrmann, BMEL, International Projects Department, summarized the event and thanked all participants for the successful cooperation over the past years. She emphasized the importance of further cooperation between the two countries in the future, especially in the areas of climate and environment, new animal-friendly husbandry methods and sustainable agriculture.

In his closing remarks, Dr. Liu Chousheng highlighted the improvements in animal husbandry that have been achieved through the project work and advocated a continuation of the German-Chinese cooperation in animal breeding and husbandry. With this the event closes.