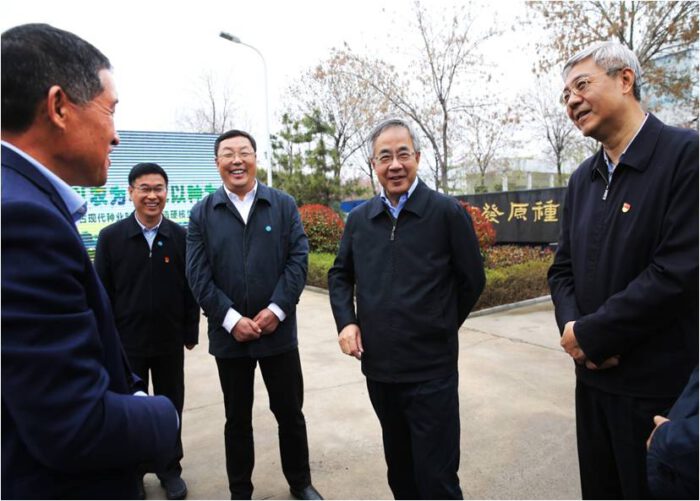 Vice Premier Hu Chunhua toured Yifa Herding and gained a comprehensive insight into the production and supply of breeding pigs and boar semen production. He encouraged the company to make further efforts to intensify sperm production.

During his visit, Vice Premier Hu Chunhua highlighted Yifa’s work in stabilizing pig production and supply security. He appreciated the efforts of the company, which has been active in pig production for 17 years and has been vigorously promoting the search for “breeding and disease” solutions in the industry.

Vice Premier Hu Chunhua gave comprehensive guidance on how to win the turn in the breeding industry and make good use of boar semen resources. He encouraged the company to remain committed. He said that the goal should be to expand the advantages of the breeding industry. In this way, a significant development contribution can be made to the national pig production.

Yifa Chairman Yuan Quanshui reported that Yifa is a professional pig breeding enterprise specializing in pig breeding. It has a nationally recognized insemination station and is the first Sino-German demonstration enterprise for international cooperation projects in the pig industry. The company follows the mission of continuously striving for Chinese breeding pig genetics to become world leaders. The company’s message is to become the market leader of Chinese breeding pig.

Vice Premier Hu Chunhua expressed his appreciation for the efforts and achievements of Chairman Yuan Quanshui and the development of Yifa, as well as the activities and merits in promoting solutions to eliminate the pig shortage.

Vice Premier Hu Chunhua took a detailed look at the company’s measures for internal and external protection against current epidemics. He positively evaluated Yifa for making full use of its own advantages to ensure pig production from boar semen.

In addition to pig production, Yifa’s deputy general manager Yuan Liwei made a detailed presentation to Vice Premier Hu Chunhua on Yifa’s model of using manure resources to return digestate to the fields. He also said that the promotion of rural revitalization is taking place through the creation of circular agriculture. He illustrated this through real-time drone footage over the farm site. Vice Premier Hu Chunhua reiterated Yifa’s adherence to the harmonious development of agricultural and livestock cycles, breeding and ecology.

Yifa’s mission is to continue to aim for Chinese breeding pig genetics to become world-leading. Yifa already has a national core breeding farm and a national breeding boar station, and also has the foundation to continue research. “Next, we will further focus on the breeding field and go deeper into breeding pigs,” said Chairman Yuan Quanshui.

Vice Premier Hu Chunhua’s central slogan was: “You are on the right track – the boar semen problem is the key problem of Chinese agriculture. We must make efforts to solve the boar semen problem, protect and utilize the boar semen resources, and build up the local breeding brand. We must continue to adhere to and we should continue to insist on and expand cooperation with Germany and France to exchange and learn the world’s advanced ideas and technologies, so as to promote the transformation and upgrading of China’s agriculture and high-quality development,” Vice Premier Hu Chunhua gave the direction for the company’s next development.

At the adoption ceremony, Vice Premier Hu Chunhua instructed the Ministry of Agriculture and Rural Development and other relevant units and departments to provide Yifa with the necessary policy support. He said the company should be motivated to continue to step up its efforts. Vice Premier Hu Chunhua’s earnest request and instruction was to build a national strategic center for live pigs here, establish a world-class gene pool for breeding pigs, and help strive for a good turnaround in the breeding industry. This could fulfill the nation’s expectations and hopes for independent breeders and quality pork. All company employees are encouraged to make their dedicated contribution to this end.